skip to main | skip to sidebar

Tonight, I am headed eastbound to my 10 year high school reunion. I haven't kept in touch with a one of them, and I'm wondering if anybody will have any idea who I am. I'm thinking of playing it gay.

Tomorrow, M and J are in town and we'll be going to the Husker/Cyclone football contest. Should be a doozy.

Trying to clean up the Octopus box--it is so heavy. Rejections and acceptances within the next couple weeks, I hope.

Go Cleveland!
Posted by Zachary Schomburg at 7:34 AM 4 comments:

What I want people to say about my poem in workshop: I love your poem. I love you, Zach.
What I want to say sometimes about other peoples' poems in workshop: Maybe try Garamond, 11pt.
Posted by Zachary Schomburg at 3:13 PM 2 comments:

Mathias and I met today to chitchat about Lincoln reading series details. We have a name. We have details. In due time. Be patient.
Posted by Zachary Schomburg at 12:27 PM No comments:

Today was a terrific mail day. Brandon Downing sent me some of his poems on disk at Octopus' request, but I also begged him for a copy of Shirt Weapon. Mine was borrowed and not returned, and now the guy is hiding out in Mexico somewhere, or is it New Hampshire? Anyway, this is in the top five favorite books of all time. Did you read Brandon Shimoda's review of Dark Brandon? Do you have Shirt Weapon? Why not?

I also landed Joe Wenderoth's not-yet-published uncorrected proof copy of his new forthcoming book of essays from Verse, The Holy Spirit of Life: Essays Written for John Ashcroft's Secret Self (thank you Lori Shine). That doozy from the new Fence is in here, as well as one I heard him read in (I think--maybe I dreamed it) in Vancouver called "Twenty-Five Ways to Make Love Without Having Sex". I've never had so much fun reading a book that has offended me so brilliantly. It'll offend you too--put it on your Christmas list.

Chris Glomski was kind enough to send his Transparencies Lifted from Noon. I haven't had a chance to read this yet, but the initial scan looks promising. I think I'm going to try to get it review for #7. Any takers?
Posted by Zachary Schomburg at 9:32 AM 1 comment:

Happy Birthday to A 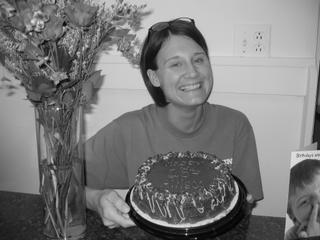 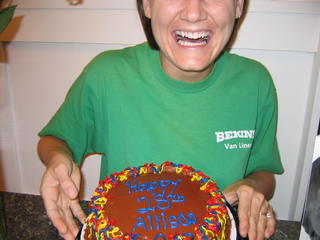 Tomorrow: going to hear one of my favorite new poets read, fellow Lincoln-ite Hadara Bar-Nadav. Then off to rock out with Neva Dinova and Tilly and the Wall. The off to A's cousin's wedding reception in Northeast Nebrasky. Saturday is A's b-day. I have a lot of ironing to do. Saw Miss Saigon last night with A. Not a real pick-me-up. Very rascist.

Then I'll be sending the old manny off for another go at it. Where should I be sending it? Anybody have a list of upcoming deadlines?

As Adam said: He and Alex Lemon and Anne Boyer will be doing a reading here in Lincoln. I'm starting a reading series (not sure of it's name yet. Any ideas?) I'll be sure to make official announcements when things become official, but you can start making arrangements for your plane tickets for later October.
Posted by Zachary Schomburg at 11:15 AM 1 comment:

Posted by Zachary Schomburg at 11:38 AM 3 comments:

It was nice for A and I to kick it with Bri and Denny this weekend, eat some enchildas and beans together, drink some Old Style in a wet booth. These are terrific people--the days are young.

I'm not your Fence Books winner, but my boy's Sex Hat was a finalist.

My issue of Spork came in the mail. One of my very favorite mags I think. Annalynn Hammond is consistently amazing in everything I find her in. Her book, Dirty Birth, is forthcoming from Sundress.

Tonight, I see my paternal grandmother. We will dine. Tomorrow, is study day. Oh, the papers I will write!
Posted by Zachary Schomburg at 12:54 PM 1 comment:

I got to hang out with Denny and Mathias at Yia's Yia's last night for beer and pizza. We talked about making this reading series thing a go, venues, readers, etc, the possibility of #8 being a print issue, some of the best poems from our submission period, Mathias' first hello to Tony Tost at Tony's coffee shop, Portastatic, bad and good Noise Rock, Beastie Boys, bad and good beer, Denny's name being carved in the bathroom wall above the urinal, etc, etc.

Tomorrow (Friday), a poem of mine will be posted here.
Posted by Zachary Schomburg at 11:28 AM 1 comment:

Just now, the neighbor girls (2 and 4) picked the beautiful and proud red flowers in my window box and knocked on my door to give them to us, as a present, in good will. Tonight, I egg their house.
Posted by Zachary Schomburg at 3:06 PM 2 comments:

Rock over London.
Rock over Chicago.
Budweiser, the kind of Beers.
Posted by Zachary Schomburg at 9:02 PM No comments:

I'm fed up with the parking at UNL so I've decided fight it. I turned in my parking pass and am prepared to use a strategy that employs both the city and campus bus system and my trusted $3 bicycle (see blog archives for March 21, 2005). I set up an appointment with the Director of UNL's Parking Services to discuss my getting a full refund and not a pro-rated one. I only twice found a space. RiDONKulous.

Today was my first attempt at the bus and I failed miserably. After parking 15 blocks from campus in a quaint little neighborhood I mistook a city bus stop for a campus one. Twice I watched the campus bus pass me, half of full of students peering out at me. It was on the second pass that I figured I was standing on the wrong block. What made it somehow worse was that I was carrying my 1950's blue collar metal lunch box. There I was watching two buses go by without stopping for me while I stood still and helpless, metal lunchbox at my side. I was 7 again. I ended up just walking the whole damn way.

Starting a new chapbook manuscript this week. I'm determined to distance myself from The Man Suit. I'll just send it off with its little backpack on, give it a gentle few taps on the ass and let it go to be read by some presses this fall. If it makes it, I'll be proud of it. If it doesn't, I'll change the locks before it gets back. Anyway, I'm taking Thornburn's advice on this chapbook (never really wrote for a chapbook manny before) and building off a few displaced Man Suit poems and taking them in a new and bizarre direction.
Posted by Zachary Schomburg at 11:54 AM 1 comment:

Having thoughts of putting a poetry reading series together here in Lincoln. Have a few possibles lined up, possibly. Trying to think of a name for the thing--always the first step. Trying to line up a venue. Exciting times--I'll get back to you later with what I don't know (now).

Tinkering with the manny for the fall send-outs (I gots my 200 dollars saved up for the attack). It seems to keep getting smaller. Is that the way it should be? Starting a new one, but man, all these new poems want into the old manny. I tell them no, but they won't listen.

Today we're hosting A's grandparents for grandparents day. I grilled too many bratwursts. Then C and I cleaned the dead leaves from my gutter.
Posted by Zachary Schomburg at 2:43 PM 2 comments:

If you submitted to the Octopus August reading period, I'm sending your poems off to some other readers today. There are 240 of you. 140 of you will be read by someone else but me. So, if you're interested in a mag's digits, there you be.

Today I go to the student theater to watch North by Northwest for 1950's class. Then go to teacher orientation at Southeast Community College for a second comp class I'll be teaching, then back home to write a paper. I'm a busy man, baby. And I ain't even gots time for that.
Posted by Zachary Schomburg at 9:14 AM No comments: 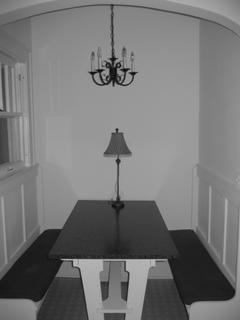 The booth in our kitchen. In this photo it looks dark and haunted. Well, it is. It's haunted by past homeowners who died while dining casually.
Posted by Zachary Schomburg at 10:07 AM 12 comments: 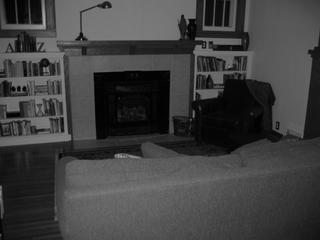 Reading and conversation quarters.
Posted by Zachary Schomburg at 10:04 AM No comments: 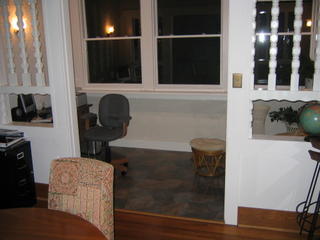 Where the magic happens (poetry writing).
Posted by Zachary Schomburg at 9:55 AM 1 comment: 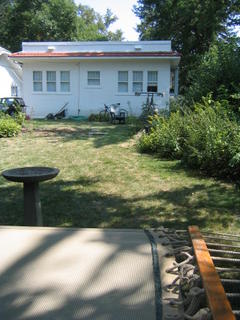 I worked on the backyard too. Notice the grandma swing (we put that together yesterday in no less than 4 hours), notice, again, the absence of leaves, notice the window/plant room on the side of the house (my fav room). You should come by sometime and sit in our hammock.
Posted by Zachary Schomburg at 11:18 PM No comments: 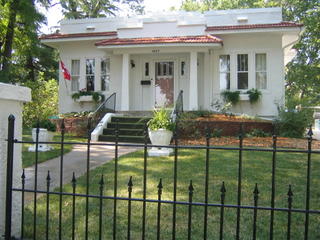 I did a lot of yardwork today. I am a good home-owner. I raked and raked and swept and watered. Look at my nice yard and landscaping. Notice the Nebraska Huskers flag--notice how it matches the red flowers in the flower box. Tonight is the first game against the Maine Blackbears. A and I got tix and we're so going.
Posted by Zachary Schomburg at 12:11 PM 1 comment:

I did my regular weekly check on the new Fence to see if it is up and online yet, and today, lo and behold, I saw a different page. I am so excited. I badly want to see my name on their site. But all I could see were a gi-normous pair of milky white breasts. And, of all places I had to be for this great moment, I am in the public computer lab with my screen facing outward. I had to click away--I am too scared to go back. I really don't want to be the computer lab perv. I can't wait to go home and scan the issue (and maybe get a better look at the boobies).
Posted by Zachary Schomburg at 11:53 AM 1 comment: 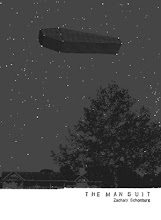 From the Fjords (chapbook) 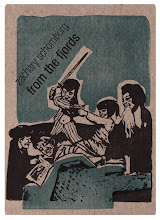 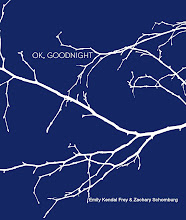 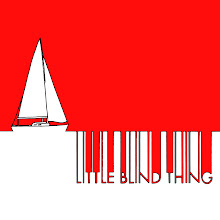 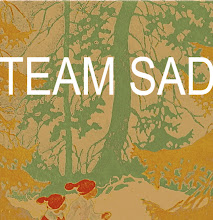 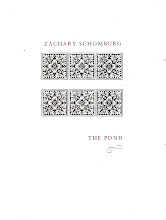 I Am a Small Boy (chapbook) 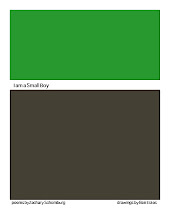 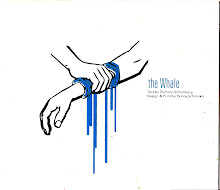 4/7. Thursday. National Book Foundation Retrospective. The Cleaners at the Ace Hotel. Portland, OR.

4/9. Saturday. The Harp and Altar presents at The Switchyard. Portland, OR.

Reviews of The Man Suit

Reviews of Scary, No Scary